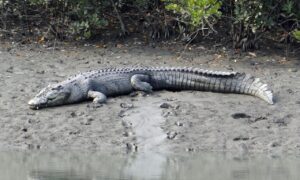 Behaviour: Saltwater crocodiles are considered very intelligent and sophisticated animals. They communicate by barks and are thought to display four different calls, including a high-pitched distress call performed by juveniles in a series of short barks. Threat calls consist of a hissing sound made at intruders. The hatching call is performed by new-borns as a high-pitched short bark, and finally, the courtship bellow is heard as a long, low growl. Saltwater crocodiles use thermoregulation to maintain body temperatures. They cool themselves in water and warm themselves in the sun.

Mating and Reproduction: Salties court and mate much the same way as do other crocodiles. But they are much more territorial than the mugger. During the breeding season, smaller males have to stay out of the way of the big adult females and males, or they could be killed. The biggest difference is the nest. The female saltwater crocodile builds a fine, large mound of leaves and sticks. In this, she digs a hole at the top to lay her 50-80 eggs. If the nest is near water, she will guard it from the nearest channel. But salties usually nest at the edge of mangroves, where the freshwater swamps meet the tidal zone of the sea. Thus, there is often no suitable water-way. So the female digs herself a wallow that fills with water, and lies in it to protect her eggs.

Population:  Approximately 1000 adults are surviving in India. Global population is nearly 2,00,000. The IUCN rates the species as a whole as “Low Risk”. The US Fish and Wildlife Service rates the Australian population of this species as “Threatened”, does not rate the population in Papua New Guinea and rates the population in other countries as “Endangered”. Saltwater Crocodiles from Australia, Indonesia and Papua New Guinea are included in Appendix 2 of the CITES treaty, which limits international trade. Members of the species from all other countries are listed in Appendix 1, which means they may not be traded internationally.