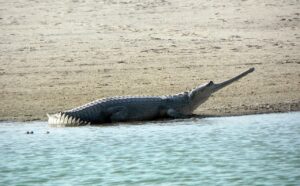 Behavior: Gharials are very smooth-bodied and streamlined, more so than any crocodile in the world. They certainly the most aquatic of the crocodiles, rarely leaving the water except to bask and to lay eggs. They do not walk overland, as do muggers, and spend their lives in the large, deep rivers. Gharials are usually gentle animals, but males may have fierce fights during the breeding season and females defend their nests with ferocity.

Mating and Reproduction: Like the mugger, gharial breeding begins in the winter months. When mature at about twelve to fifteen years, the male gharial grows a big knob on its snout called a “Ghara”, the Hindi word for pot. In fact, this is the only crocodile in which males and females are different.  The ‘ghara’ grows right over the nostrils and, when the gharial makes the usual hiss of a crocodile, it gets amplified. It becomes a loud buzzing sound which probably helps to attract females as well as to tell other males in the area to keep away.  Females lay 40-80 eggs in March or April on the high silt and sandbanks of the big rivers. The eggs incubate in the sand for about 70 days and when the babies are ready to hatch, they call from inside the egg. This is a signal for the female to dig them out. Mother leads young to the safety of the water.

Population: 211 adult individuals as per surveys done in 2017-2018 in India. IUCN rates this species as “Critically Endangered”.